OPIOID OVERDOSES ARE AT RECORD HIGHS. IT DOESN’T HAVE TO BE THIS WAY

You are here:
Press 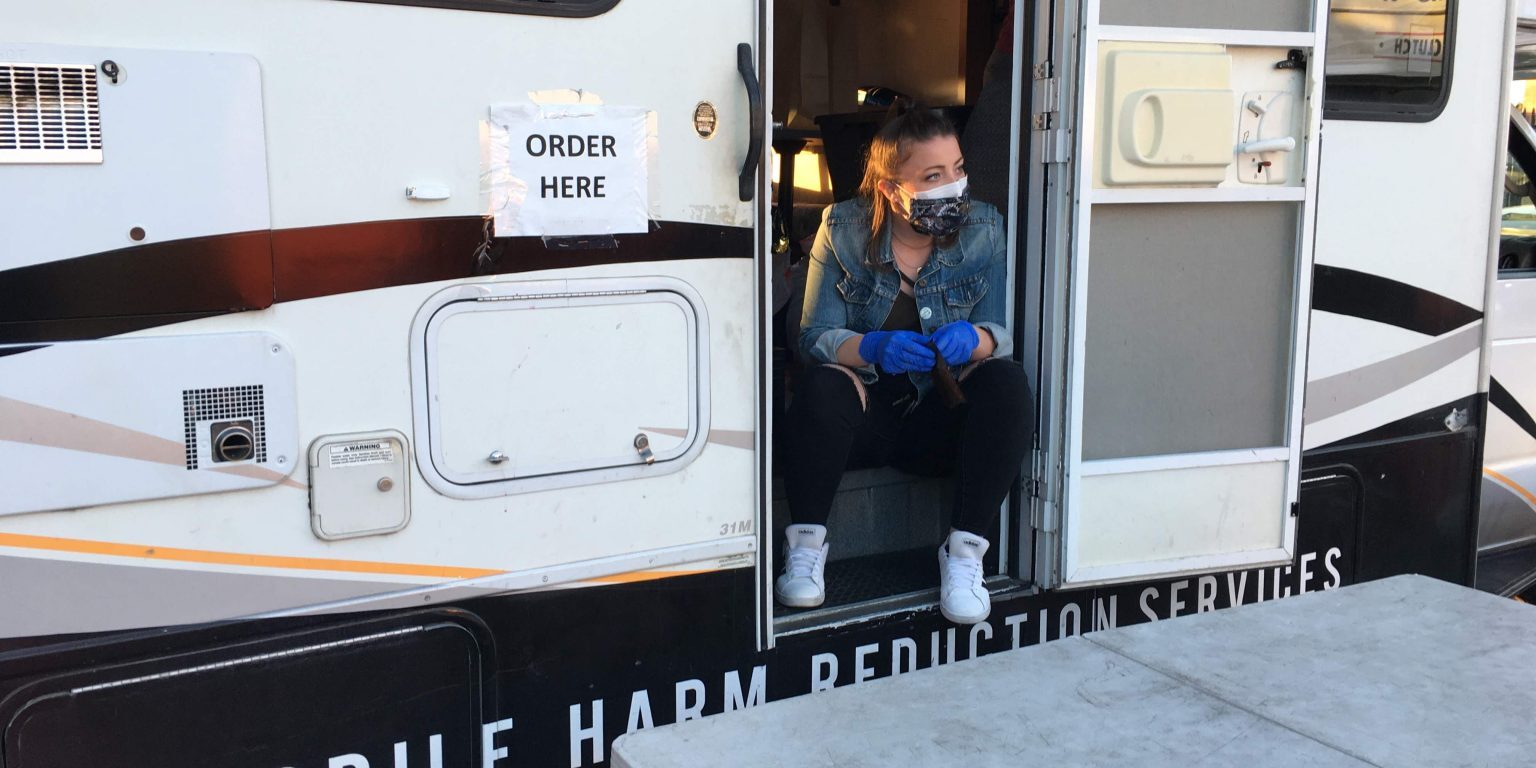 This article was originally published on Street Spirit on Sep 6, 2021 by Ariel Boone

When Thad regained consciousness, the lighting looked different and his body hurt. He remembers getting up and walking around his encampment, where a friend called out to him and told him he looked ill. He was overcome by nausea and vomited in a port-a-potty, then tried to lay down.

He had just survived his first opioid overdose after smoking fentanyl. The woman he smoked with administered the overdose reversal drug Narcan, to revive him and restart his breathing. Now he was in withdrawal.

“It was kind of scary afterwards to think about it, because I’d seen it happen to other people,” Thad says.

Thad is one of thousands of unhoused people who deal with substance use in Alameda County. He faces triple crises: homelessness, pandemic, and now, an overdose surge that has reached historic levels.

To better understand the overdose crisis, Street Spirit spoke to over two dozen people over the course of 16 months, including unhoused people who use drugs, harm reduction advocates, county employees, and medical providers. We followed outreach workers in North, East and West Oakland who are on the frontlines of the overdose crisis: distributing life-preserving supplies and services to people who use drugs, and advocating for the structural change they believe could prevent overdose altogether and provide dignity for people on the street.

When the Bay Area went into pandemic lockdown in March 2020, Thad was 34, living unsheltered in Oakland, and using opioids. “They told us to stay within our isolated group as much as possible and not to interact with other camps, which is somewhat impossible when you’re trying to have money, and as a drug addict,” says Thad. “I felt kind of alone, or like we were just going to be left behind.”

It took two months of agitation and pressure from residents and social workers to get the city to install hand-washing stations where he was staying. A thought crossed Thad’s mind: Oh. We’re screwed.

Housing is inseparable from the overdose crisis. In the most recent Alameda County Point-In-Time Count in 2019, 30 percent of unhoused people surveyed said they deal with drug or alcohol use. Crucially, not all unhoused people use drugs. But for those who do, living unsheltered is often a catalyst. Being exposed to ongoing trauma can trigger drug use, or drug use at increased amounts.

“People can get lost in alcohol, drugs, anything and everything, because this is not a human way of living,” says an unhoused Berkeley resident named Ana, whose friend was found dead from a suspected overdose in June. “We need to be intoxicated in order to endure what we endure.”

The national rates of opioid overdose have never been higher, and during the pandemic, the crisis measurably worsened. Across the United States, death rates from opioids seemed to stabilize and even decline slightly from 2017 to 2018. In fall of 2019, they began to climb. And by March of 2020, they started to skyrocket.

In Alameda County, the data shows the same: deaths and emergency department visits from opioid overdose have continued to rise, spiking at the end of 2019 and in the months when COVID lockdowns began.

This is no coincidence.

Savannah O’Neill has her finger on the pulse of overdose prevention across the United States. And in early 2020, she was nervous about an upswing in overdoses and deaths.

At the National Harm Reduction Coalition, O’Neill works to expand free syringe programs and services for people using drugs across California. She worried that social distancing requirements and fear of COVID could drive people to use drugs alone instead of with friends or in groups. Using alone means nobody would be present to revive someone from an overdose with the medication Narcan.

We’re not here to just provide a service. We want to be a part of the community and we want to give people the resources that they need to survive

COVID pulled the rug out from under vulnerable communities, advocates say. Unhoused community members who were previously staying on the couches of friends or family may have been asked to leave when the virus hit. Libraries closed, and along with them, bathrooms and charging outlets disappeared, as did places for unhoused people to shower and do laundry.

“All of us, regardless of drug use, rely on routine to keep ourselves stable. And when that gets interrupted, that’s scary for overdose risks, for increased drug use, for different kinds of drug use, riskier behavior,” O’Neill explains. Without wireless internet and a place to charge up, how can an unhoused person attend a 12-step meeting for addiction that now takes place online?

Plus, the pandemic is a collectively traumatizing experience, she told Street Spirit. “And what we know about trauma and drug use is that they’re really linked together.” Traumatic events, isolation, job loss, the death of loved ones—all these things can trigger drug use, both for people who use drugs and those who have been sober for years.

But it’s not just the pandemic. The drugs on the street are also changing.

A closer look at fentanyl

Everyone agrees fentanyl is a core cause of the overdose crisis. It’s a pain reliever developed in 1959, now commonly prescribed in hospitals for severe pain and surgery recovery. But almost all of the street supply is made in illicit labs with components manufactured in other countries, including China, Mexico, and India.

A viral image circulated by police departments shows vials of salt labeled heroin, fentanyl, and carfentanil—a more powerful relative of fentanyl—with similar potent doses of each. Next to the spoonful of “heroin,” the fentanyl and carfentanil look like grains of sand. The message is: It takes much less fentanyl and carfentanil to get you high. And in the Bay Area, it’s increasingly concealed in the street supply of pressed pills, as well as stimulants like meth and cocaine.

Thad points out fentanyl is “cheaper than a heroin addiction,” and speculates that with widespread and increased poverty during the pandemic, more people are choosing to use it. In other words, as fentanyl and other synthetic drugs bleed into the drug supply, people begin to regularly use them, too.

Thad first started using fentanyl in early 2020. The second or third time he smoked it, he says, he overdosed.

An overdose occurs when the physiological effects of a drug exceeds the body’s tolerance, overwhelming the body’s ability to keep itself alive. During an opioid overdose, a person’s breathing becomes shallow and slow. Oxygen levels drop dangerously. But overdose does not always end in death—there’s a window of time after someone takes a fatal dose of opioids where the drug naloxone can revive a person. Narcan immediately puts that person into withdrawal, evicting the opioids from receptors in the brain and taking their place for 30 to 90 minutes.

“I’ve overdosed three times in the last year to where I had to be Narcanned back to life,” Thad tells Street Spirit. “I probably would have died for sure, just from inhaling a tiny bit of smoke. It’s crazy.”

He thinks he likely overdosed as a result of accidentally mixing fentanyl and alcohol all three times. I ask Thad if he carries naloxone, and he produces a red pouch from beneath his shirt, hanging around his neck. The medication is zipped inside—he brings it everywhere.

Some longtime drug users may choose fentanyl after building a tolerance to other opioids.

“The reason why I use fentanyl is because I got tired of using needles,” says Kory, an unhoused resident of West Oakland who works as a sign flyer, twirling business advertisements to passers-by.

Over time, it became harder on Kory’s body to inject heroin. “If I were to try smoking heroin, that’s not fulfilling at all. But when I smoke fentanyl, I actually feel it,” he says, “and the needle thing has become just a nightmare when you don’t have veins.”

But despite using fentanyl himself, he wants to warn others not to start using it, saying it is very dangerous for anyone who is not a longtime user. “Keep some Narcan on you,” Kory urges. “You might save a life.”

Thad told Street Spirit he hopes to stop using fentanyl and try medication-assisted treatment. He describes using fentanyl as “kind of like straddling death. It’s the end of the road,” he says. “It’s tightrope-walking death, you know, to get high.”

Synthetic opioids like fentanyl have driven the increase in fatalities in recent years, representing 83 percent of fatal opioid overdoses in the United States in the 12 months ending in January 2021. In comparison, fatalities from heroin have stayed relatively constant, even declining, since 2015.

In Alameda County, the numbers show the same. In the latest data available, the fatal overdose rate from synthetic opioids just goes up, and up, and up.

In the beginning of 2020, the Alameda County Public Health Department released a fentanyl overdose health advisory, which reported “an increasing number of suspected fentanyl overdoses among persons without a history of opioid use, such as cocaine and methamphetamine users.”

At this point, any street-purchased drugs could contain fentanyl, the county says. This means that many people are consuming fentanyl unintentionally, which often leads to overdose. Seth Gomez, senior pharmacist with Alameda County Healthcare for the Homeless, says the risk factors for an overdose now include using “any drug that is acquired from the street,” including both “hard drugs” and street drugs that appear to be prescription products like Xanax.

“I think it’s in all the drug supply,” confirms Katie O’Bryant, an outreach worker with West Oakland Punks With Lunch, a volunteer harm reduction group that hands out safer drug use supplies, hygiene goods, food, and Narcan to unhoused people like Thad and Kory.

“A lot of people say it’s just been stepped on more, it’s not as good,” says the group’s founder, Ale Del Pinal. “Stepped on” connotes additives or unwanted substances being cut into someone’s drugs.

“People are overdosing, and it’s just a shame because it’s not necessary,” Del Pinal adds.

Overdose is not the necessary conclusion of drug use, advocates like Del Pinal say. The harm reduction supplies the Punks pass out, such as Narcan, provide a strong defense against the increasingly unpredictable drug supply—and give people the tools they need to survive so they can choose how they want to live their lives—a choice advocates believe belongs to each of us.

PART II—WHAT IS BEING DONE?

In April 2020, Michaella Jones sat in an RV wearing two masks and sterile gloves, holding clean biohazard containers for used syringes, ready for her next visitor. A line of nine people stretched from the RV parked in a cul-de-sac in Fruitvale to an auto-repair parking lot across the street.

Jones is the coordinator for overdose prevention, education, and naloxone distribution with HEPPAC, the HIV Education and Prevention Project of Alameda County. Throughout the week, HEPPAC dispatches workers in Oakland and Contra Costa County to distribute supplies, with the stated goal of curbing HIV and Hepatitis C transmission in the East Bay among people who use drugs. They are one in a small group of syringe exchange programs in Alameda County that hit the streets to deliver services in historically excluded and disenfranchised neighborhoods.